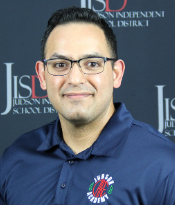 Mr. Campos worked at a large insurance company for five years before he returned to Judson ISD in 2018 as a school bus driver.  In 2020, he accepted a position as a Special Education Aide at Judson CARE Academy.  As of the 20-21 school year he has transitioned into a Special Education teaching role at JCARE.

Mr. Campos has been married for 18 years, to a current Judson ISD teacher, and has 4 children who attend Judson ISD schools. He feels that he has a vested interest in education and wants to help his students achieve success.  He spends his free time learning about different ways to integrate technology into lessons, making music with his family and working out.