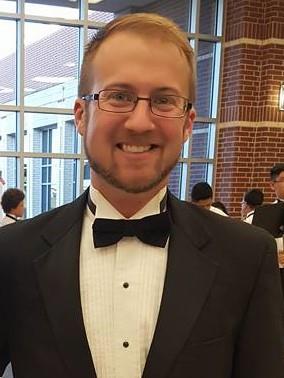 is in his 5th year as Assistant Band Director at Metzger Middle School and 7th year teaching. His responsibilities include teaching the beginning woodwind classes, Symphonic Band, and woodwind sectionals for the Honors Band. Under the direction of Mr. Aynes, the 2017 and 2018 Symphonic Band received the "Sweepstakes" award at the UIL Concert & Sight-Reading Evaluation. He is also the Middle School Band Chair for TMEA Region 11 .

Prior to coming to Metzger in 2015, Mr. Aynes taught two years at Fairview Junior High School in the Alvin ISD. Under the direction of Mr. Aynes, the 2015 Fairview JH Symphonic Band II earned the "Sweepstakes" award at the UIL Concert & Sight-Reading Evaluation and the "Best in Class" award at the Gator Music Festival in Dickinson.

Mr. Aynes graduated from Baylor University with a Bachelors of Music Education degree with an emphasis in Instrumental Music. He performed as principal bassoonist in the Baylor Symphony Orchestra and Wind Ensemble. Mr. Aynes also performed on alto saxophone with the Golden Wave Marching Band and baritone saxophone with the Baylor Concert and Jazz Band.

He graduated from Willis High School in Willis, Texas, where he was a three time all-state bassoonist. His passion for teaching was inspired by Wendy Marquart and countless others.

Throughout his career, Mr. Aynes has had the opportunity to travel and perform in locations such as concert in Belgium, movie film accompaniment in Florida, and throughout Texas. He has also performed with the Baylor Wind Ensemble at the Texas Music Educators association convention as the premiere collegiate wind ensemble.