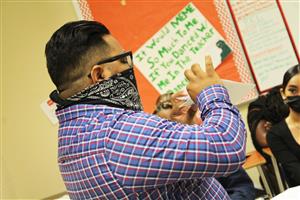 JISD Spotlights would like to introduce to you the teacher who brought a Mexican American Studies course to Judson ISD. The course is about people, their culture, and the land they've lived on through empires, nations, borders, and wars. The students learn how people and their cultures have grown and adapted over the years.

Growing up in the Westside of San Antonio, he learned that life was a struggle and that he had missed out on so much education. He mentioned that it wasn’t the lack of trying but the lack of emphasis on education in lower-income neighborhoods that helped him find his passion and a lifelong commitment to the youth. Today he is a part of the GT program, Senior Committee, is an evening school coordinator, a common knowledge sponsor, and more! He works tirelessly with the college and career counselors to bring in military recruiters and help organize college field trips, exposing students to college before they graduate. Mr. Dominguez would like to thank his campus administration and Dr. Ball for supporting his courses and the push he gives for higher education.

"They won’t remember every word we say, warm-up or test, but hopefully, they use the skills we taught them to grow and advance themselves in life."
- Mr. Michael Dominguez Teacher at Judson High School