The Judson ISD Board of Trustees approved the selection of a new leader to head the athletic programs for Judson High School. Judson ISD is excited and proud to introduce Coach Mark Soto as the new Athletic Coordinator & Head Football Coach for our school. As we enter into the start of a new year, the District is confident about the direction this gentleman will take our athletic programs and the trajectory of impact on students in the both the athletic and academic realms. 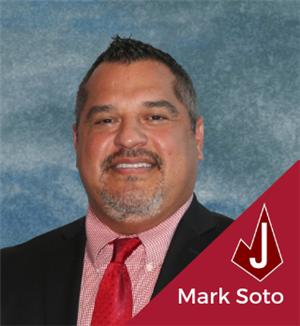 A class of 1991 graduate of Judson HS, Coach Mark Soto is not only familiar with “Rocket Pride”, he lived and breathed it. As an alum of Judson HS, Soto played an integral role in the success of the school’s football team and proved himself to be a model of what it means to be a Rocket. He was Team Captain and Defensive MVP his senior year, as well as the recipient of the “Fighting Heart Award” given by Judson Football for overcoming a multitude of challenges and adversity in order to thrive in school. Mark played under legendary Judson coach D.W. Rutledge who helped shape the coach he is today.

Soto has gained much knowledge and expertise in his more than 25 years of service in education. His leadership helped to promote positive climate and culture with student-athletes and colleagues to build solid foundations for student success in the districts he has served. This is evident not only in the many recognitions and state championships that he led but also in his work ethic and passion for character building. He believes good character is key to becoming a better athlete, a better student, and a better member of the community.

Coach Soto is a former Senior Director for Region 8 of the Texas High School Coaches Association, Director of the San Antonio Area Football Coaches Foundation, former attendance committee member of the Texas Athletic Director’s Association and member of the American Football Coaches Association. Texas Coach magazine recently published an article entitled “My Biggest Fan” that Soto wrote about his deceased father. He is also the director the Greater San Antonio Football Coaches Foundation. In his downtime, relaxing vacations with family and friends brings him the most joy. Soto’s parents, Juan and Virginia Soto, are credited with molding his beliefs. Also playing an important role in his life and supporting all of his endeavors are his siblings, John and Lisa and his nephew Christopher. The morals and values that have been instilled in him since childhood shine through as he embodies his mission of coaching to change lives. As an alumnus of Judson High School, Coach Soto understands the importance of strong traditions of excellence and he also passionately believes that you must build character first. Welcome home, Coach!