Wagner High School World Geography teacher Adam Lopez was selected as a recipient of the 2019 Yale Educator Award. This award, sponsored by the Yale Office of Undergraduate Admissions, recognizes educators from around the world who inspire and support their students to achieve excellence by instilling a dedication to performing at high levels to reach their goals.

Students entering the Yale Class of 2023 were asked to nominate outstanding educators who have profoundly impacted their lives. 2019 Wagner graduate and class valedictorian Kayleigh Larsen nominated Mr. Lopez for the award. The winners were then considered and selected by a committee formed by the Office of Undergraduate Admissions.

Mr. Lopez has been with Judson ISD for six years...the first three were at Kirby Middle School before moving to Wagner. He graduated in 2013 with a degree in Organizational Leadership from National American University after service in the U.S. Air Force. He is currently pursuing a Masters in Unmanned Space Systems in Aeronautical Engineering. He is also a part of the Wagner Athletics program coaching Cross Country and Track and leads an FCA chapter at the campus.

We congratulate Mr. Lopez and thank Kayleigh for nominating such a deserving teacher. 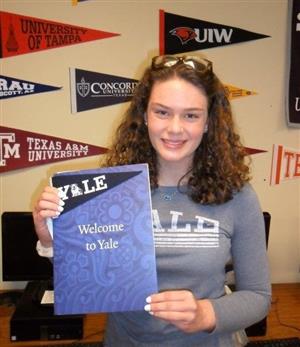