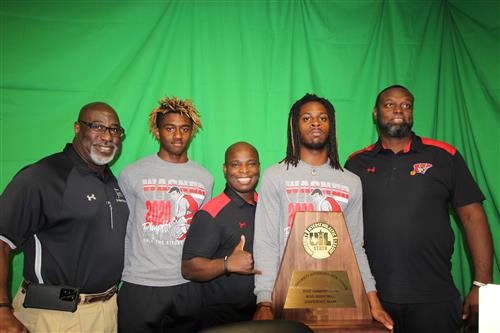 University Interscholastic League or UIL presented the 2020 Wagner High School Boys Basketball team with a virtual award presentation for making the 5-A Boys State Basketball Tournament...for the second year in a row.  If you remember last season our Wagner Boys Basketball team was fortunate enough to make it to the state tournament having a tremendous season, just coming up short in the final game.

This year’s season was dedicated to returning to the State Championship Tournament and finishing what was started the year before. Just making it to the State Tournament is a huge accomplishment but going to it two years in a row is very rare. This year after preparing for their first game in the tournament and getting on the bus to go to the Alamodome, they were informed that the State Tournament had just been canceled.  The boys, coaches, parents, school, and fans were devastated, but this coming year will hopefully be a different story.

Congratulations to Coach Clark and Smith and all the guys for this great achievement.