This past Wednesday October 28th the Veterans of Foreign Wars Post 4676 located in Universal City paid a visit to the Wagner JROTC Program.  Their Commander, Al Reams came to present a $150 Check and a certificate to CW3 Michael Good, as their winner for “Teacher of the Year”.  Commander Reams said he was selected over numerous nominations and was very impressed by CW3 Goode’s military service and everything he does for his students and our community.  His nomination will be forwarded to District 20, to compete against 18 other Teachers and if he is selected as the District winner, he will move forward to compete against hundreds of teachers throughout the state of Texas.  Cw3 Goode thanked his other Instructors, his Cadets and said he shares the award with them, because they are a TEAM.  Congratulations CW3 Goode and good luck at District and State. 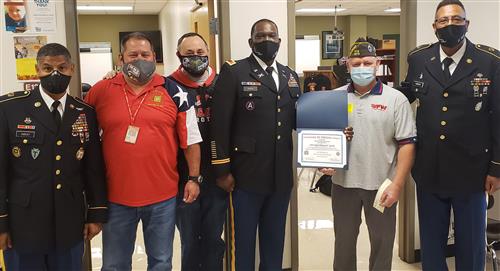