March Employee of the Month is Tom Walker

Tom Walker is a Judson HS alum and started working for the district two weeks after graduation in 1991.  Judson pride runs through Tom Walker's veins.  He is the maintenance supervisor for Judson ISD and is known for his willingness to lend a helping hand with a smile.  After work, he loves spending time with his wife Paula and their boys at church, coaching or watching football as a family.  Teamwork is something fundamental in the maintenance department.  Mr. Walker likes to share a story from 1997 when he and his team arrived to work one morning when Judson HS was hosting the first baseball playoff game with East Central.  They soon became aware that someone had broken into the complex, put a water hose on the pitcher’s mound, and turned it on.  Because of this, the sand for the mound and third base side of the infield was gone.  Coaches and athletics crew were determined not to let the vandalism hinder the game.  They all worked together to rebuild the entire field, and the game was a go.  Working as a team in the heat and mud just proved to Mr. Walker and all who were involved that they could do anything that is needed to do for the district to overcome any adversity.  Mr. Walker uses this story to continue that same solidarity and motivation to do whatever it takes to this day.  We are proud to have a lifelong employee like Mr. Walker in the district and are honored to name him JISD employee of the month for March. 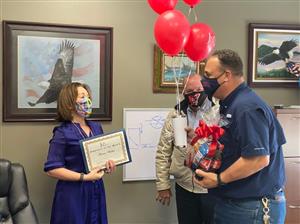 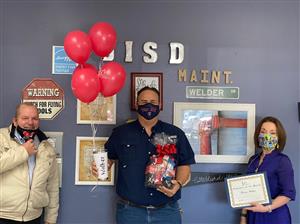 View all the photos.

Submit a nomination for Employee of the Month.