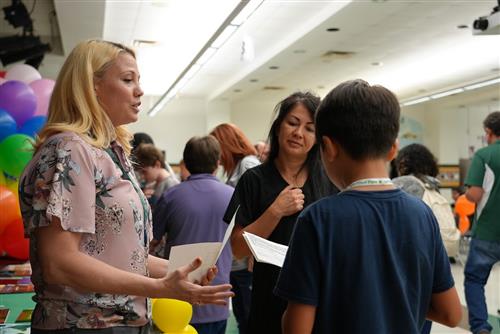 In the education world, Bloom's Taxonomy is universally known. It defines educational expectations, with “create” at the top. Meaning, if students are able to create something in a classroom, that is the highest level of learning.

In English classrooms at Kitty Hawk Middle School, students write, illustrate, and publish their own books, all because of the efforts of Ms. Misty Ferrell.

While in college, she found StoryJumper, a publishing site that published children’s books. She wrote a book and had it published through the site. She found it so incredibly easy to use that she turned it into a project in her classroom when she began teaching at Kitty Hawk.

“I thought - if only they could [leave with] something tangible,” Ferrell said.

Like any project at this scale, it requires funding. She reached out to numerous community organizations to assist with the publishing fees associated with the project.

“First Baptist Church of Universal City paid for all of the books the first year I did it,” Ferrell said. “And before they said they would buy all the books, a couple of teachers were donating money for the students.”

People who donated, from businesses to individuals, were able to also give inspirational words on the inside covers of the student-authored books, which helped fund the cost.

And as the donations kept flowing in, Ferrell figured she could grow the project.

“I reached out to as many people and as many businesses as I could, all around San Antonio,” Ferrell said. “Our first year, we had so much money, it paid for a third of the books this year. So, I told my colleagues, ‘I have this extra money left over and I know I can raise enough money to cover all of us.’”

This was the first year the entire 6th grade English team’s classes were able to have their student’s books published - that’s 400 students who are now authors.

Ferrell was adamant to give a shout-out to First Baptist Church of Universal City.

“They want to keep those community bonds together,” Ferrell said. “They just want to let Kitty Hawk know that if there is ever any need, they are there.”

Other businesses have also been very influential in the overall project, including Bill Millers BBQ on Pat Booker and Rapid Fire Pizza.

The effort of Ms. Ferrell is about students learning the writing process from beginning to end, the publishing process, and leaving with something tangible. Not only is it important for the students, but impactful for the parents.

“When we are in the trenches, I think about those moments when the parents rush out and help me to ensure this project comes to fruition,” Ferrell said. “I use that when I am at my lowest. If [students] can see how proud their parents are, and even how the community can rally behind them, it can give them a sense that - they did something. Maybe it can change their feelings about writing because it is hard - it is thinking on paper.”

As long as the support is there, Ferrell hopes to continue the project to ensure every one of her students leaves Kitty Hawk Middle School as a published author.

Click here to view photos from their event. Is there an event, student, teacher, or community member you want to highlight? Click here and let us know about it!